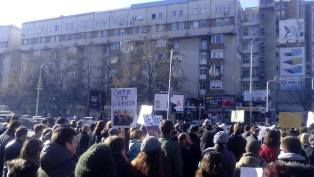 Announcement | press to exit project space | support to the protesters against the new governmental law of increased taxes.

press to exit project space’s team writes in order to express concern about the recent government plan to increase taxes of contract workers and casual employees.

The intention of the government to introduce fees for paying taxes from January 1, 2015, which will be increased from 10 to 35 per cent, will lead to greater poverty and unemployment. In addition, the exclusion of state officials and politicians from this obligation, without any logical explanation, shows that the way in which government adopts and implements legal decisions is undemocratic and exclusive, done in the absence of dialogue with the people that are most affected by it.

We agree that those policies and government practices deny human rights not only for directly affected groups (freelancers and honorarium workers), but to all other indirect stakeholders - employees in regular employment, university professors and other academics, students, etc. They also increase the wealth of the richest and consequently strengthen their positions of power and privilege.

Therefore, press to exit project space’s team declares their participation, giving support to the protesters in their fight for human rights, social justice and equality.

Processes of production, reproduction and the questioning of social orders are often connected to conflicts about and the contestation of borders. Borders are set by demarcating an outside or other from an inside, where order is established. Various orders, on the other hand, are challenged in conflicts, by shifting, perforating or deconstructing their borders, which may separate friend from enemy, law and crime, public and individual interests.

Recent developments and shifts may be seen as an inspiration to explore the interplay between borders and orders theoretically and empirically at this conference. In order to shed light on this connection on different levels and in its different manifestations, this conference draws on a very broad understanding of borders as well as social order. The topos of the border is discussed with regard to its implications for the production of and conflicts about social orders from an interdisciplinary perspective.