ArtLeaks is a collective platform initiated by an international group of artists, curators, art historians and intellectuals in response to the abuse of their professional integrity and the open infraction of their labor rights. In the art world, such abuses usually disappear, but some events bring them into sharp focus and therefore deserve public scrutiny. Only by drawing attention to concrete abuses can we underscore the precarious condition of cultural workers and the necessity for sustained protest against the appropriation of politically engaged art, culture and theory by institutions embedded in a tight mesh of capital and power. In response to blacklisting and continued abuse conjoined with unbridled exploitation, they considered it their civic and political duty to bring to light the mechanisms of corruption and inspire others to do so as well. Instead of letting singular protests succumb to anonymity, gossip or institutional hush-hush, they began working to extract from situations of inequality, general conditions that affect the social and political mission of workers and establishments for art and culture. Implicit in this collective protest is a radical form of institutional critique – through which they emphasize the urgent need to make visible and counteract all forms of repression, abuse, mistreatment and arrogance that have been normalized through the practices of many cultural managers. While each case of abuse may be different, the increasing amount of power vested in art institutions controlled by corporate players, calls out for a collective struggle for equal rights and fair treatment of cultural workers. Concretely, they will expose common-currency practices of slander, intimidation and blackmail as they are. Further, through this working platform we seek to enable like-minded people to stand together against instances of mistreatment related to cultural labor, repression channeled through dishonest management or blatant censorship. 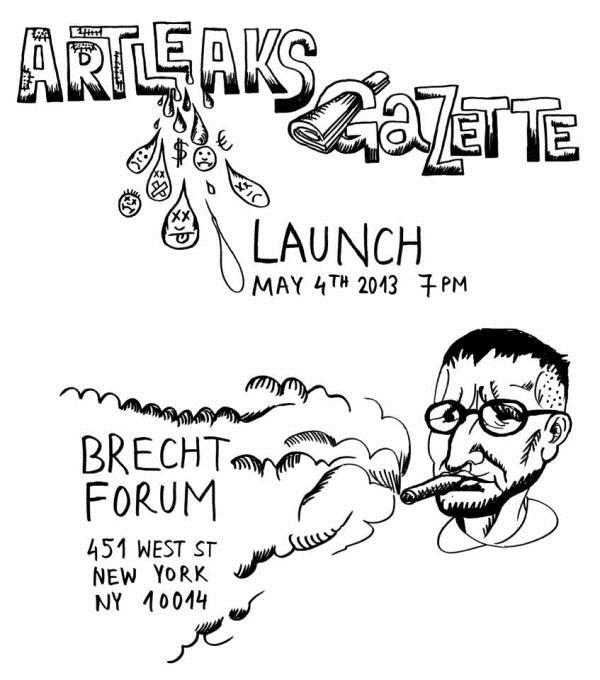 They seek to create a strong network of art systems' whistleblowers – through which they support and protect each other in critical moments as much as possible. Through the power of facts, first-hand testimonies and visual information they seek to deconstruct the politics of who, what and how is invited into the exhibition space, and most importantly the circumstances under which one is ousted and then blacklisted. They believe in the power of sustained artleaking to turn the tables on corruption and exploitation, to force art and culture institutions to publicly account for their politics and their actions. To mafia tactics and authoritarian tendencies, they answer with openness, anger and solidarity. The tools that they continue to build together are geared towards empowering – to work with dignity and articulate our positions without obstruction and to exchange information and ideas beyond national borders. They initiate and provide the community with online tools - http://art-leaks.org/  and the facebook page "ArtLeaks" – which are open for use by anyone ready to share this or that case. Each case will be archived, building a comprehensive index of repression. They believe retroactive artleaking is just as important as early-warning leaking in the present. Thus, they welcome cultural workers to publish reports on the situation inside of the institution in any form. Both anonymous and signed reports are welcome. They only ask to submit each case with collective evidence, such as first-hand reports and documentation such as e-mail correspondence, internal regulations and documents, video recordings and so on. They welcome the submission of evidence in the original language and they will do their best to make it available to international audiences. Their moderator will guarantee the objectivity of each case in a wiki style of communication with each contributor
http://art-leaks.org/2012/05/21/1st-artleaks-working-assembly-2012/