The Status Project.
A collaboration between Kayle Brandon and Heath Bunting.

This project will explore what it is to be a human being in the United Kingdom terms of social economic law. The core of this project is a relational database of personal legal status and their dependencies. For example: To be birth registered. The artists will locate this data online, provide users profiles and develop a route planner to guide people along the shortest path (critical path) to their desired status destination. From this dataset they will be able to provide many customised interfaces. They initially intend to offer services in the following forms: A guide to consolidation or dissolution of identities. A 'how-to' cross legal boundaries and attain status with minimal effort and resources (e.g. how to get a passport using combined junk identities such as video club cards or supermarket loyalty cards starting with nothing but money.) Such a guide could also be used in the reverse as a form of dataflage to dissolve an existing identity. They are currently considering a game interface that would be based around sticker book collections. Unlike most games though, this would be played out for real in both the street and the existing institutional datasets. Identity reproduction (reproduction to create another you). Enabling two identities to merge creating a 'new being' and single identity.

A legal, professional and social identity merger (marriage). This will obviously raise issues around class and inheritance. Many of our statuses are defined before we are even the twinkle in our parents eyes. Visual representations of the 'new being' would be created along-side the economic and social representation. Personal/ community disaster simulation and recovery. Back up and action plans in event of disaster. do you recover from loss of legal/ economic status as a community or individual ? This guide would provide a detour map for real or simulated personal and community catastrophes. 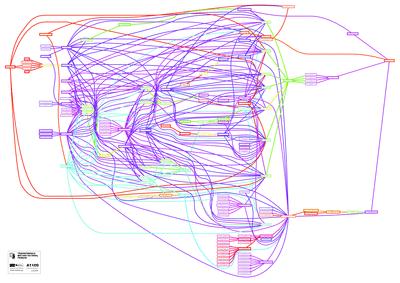 Heath Bunting emerged from the 80's committed to building open/ democratic communication systems and social contexts. He came from the street up, passing through and often revisiting graphity, performance, intervention, pirate radio, fax/ mail art and BBS systems to become an active participant in the explosion of the internet. He has produced many internet projects, some highly recognised and has helped form a strong context for the practice of net.art. Recently, he has moved into the field of genetics proclaiming it to be the next "new media", and is also developing work in the area of physical network performance.

Kayle Brandon works to make experimental, philanthropic, interventions within the everyday. Creating projects, situations, events and actions that engage, investigate and agitate spatial and social relations.Some of her current points of focus are: Autonomous movement, physicality as applied philosophy. She is interested in the functional and absurd, survival, live networks and the urban environment.